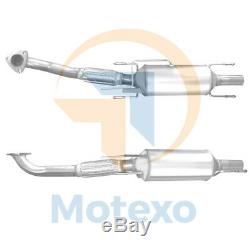 DPF VAUXHALL SIGNUM 3.0CDTi V6 (Z30DT) 9/05-7/08 Euro 4 Cat/DPF Combined. Brand New Diesel Particulate Filter This DPF corresponds to the image provided and also the vehicle as displayed in the compatibility guide above AND in the list of vehicles below.

All our DPF's exclude any engine management sensors, gaskets or extra pressure pipes unless shown in the image. The drawback with diesel vehicles however, is that they have high NOx and particulate emissions compared to their petrol counterparts. In response to this, existing Euro Emissions Standards were tightened and greater environmentally friendly initiatives were developed, such as the implementation of Stop/Start technology in many modern vehicles. One of the most prominent developments however was the introduction of Diesel Particulate Filters (DPFs). What are they and how do they work?

The Diesel Particulate Filter is part of the exhaust system which functions to remove particulate matter (soot) from the exhaust gasses. It does this by capturing, containing and converting these soot particulates into Carbon Dioxide via a process of Regeneration. Exhaust gasses containing soot enter the DPF channels which are closed off at alternating ends. The channel walls are porous, allowing exhaust gasses to pass through whilst retaining and trapping the soot particles in the DPF as the gasses are forced through. Clean exhaust gasses then exit the DPF and trapped soot particles are eliminated during the Regeneration cycles to prevent blockages and therefore, prevent the DPFs function from being affected.

They are often used in aftermarket products and can be found in our standard DPF range. Silicon Carbide (Sic) DPFs are constructed from small sections cemented together. They are more commonly used in O. E and Catalysing DPFs and are classed as a BM Premium product due to their high thermal and strength enduranceOver 50% of our standard range of DPFs are available in the Premium range which is denoted by the P suffix. Regeneration As the DPF acts as a soot trap, it has to be able to clean itself to prevent it becoming blocked and affecting the running of the vehicle. This is the process of Regeneration. There are 3 different types of Regeneration Passive, Active and Forced.

Regeneration burns off (oxidises) the particulates that have accumulated in the DPF. Passive Regeneration is a process of soot reduction via natural conversion. It occurs when ideal driving conditions apply 60mph for 15 minutes e.

The DPF becomes hot enough to burn off some of the trapped particulates naturally between 350-500°C organic conversion. The carbon soot particles are converted into carbon dioxide by a reaction with nitrogen oxide using the platinum coating which works as a catalyst Active Regeneration occurs when the optimum exhaust gas temperatures can no longer be maintained, meaning Passive Regeneration can no longer take place. Therefore, Active Regeneration is an ECU led process that increases the EGT (exhaust gas temperature) to 500-800°C. When the carbon soot deposits in the filter reach a certain level, the engine management system initiates the Regeneration process which lasts around 10 minutes Forced Regeneration involves very high temperatures and is carried out by garages with diagnostics equipmentWARNING! The very high temperatures applied during Active and Forced Regeneration can lead to an accumulation of ash and aging. The build-up of ash is treated by physical intervention such as chemical cleaning, ultrasonic cleaning or replacement of the DPF. DPF Technologies Several methods have evolved over several euro emissions regulations to aid in the Regeneration process, including: Fuel Additive Systems Diesel engines using a fuel additive system to aid the Regeneration process do not need to reach as high temperature as other engines. The additive reduces the effective temperature at which soot combustion takes place, at approximately 400°C. It is favoured by French manufacturers Coated DPFs Also known as Catalysing DPFs, the precious metal coating on the DPF catalyses as well as filters, therefore lowering the temperature at which Regeneration takes place, to approximately 400°C. The vehicle does not necessarily need a separate a Cat in this instance.

It is favoured by German manufacturers Thermal (Close-Coupled) DPFs positioned close to the engine benefit from the readily available high temperatures, meaning the unit reaches the optimum Passive Regeneration temperature quickly DPF Maintenance and Repair It is unusual for the DPF to be the cause of a vehicle fault so it is important to ensure any underlying faults are rectified before replacing a DPF. Below are a few tips to bear in mind regarding DPF maintenance and repair. The team at RSJ Exhausts is highly skilled, with many years of experience in the motor parts trade. We are a state of the art Internet based business and trade store that uses the vast knowledge of its employees to source the best deals for you possible.

All our stock is supplied direct from the factory ensuring you get the latest developed product. The item "Exhaust Diesel Particulate Filter DPF VAUXHALL SIGNUM 3.0CDTi V6 Z30DT 9/05-7/08" is in sale since Wednesday, November 22, 2017. This item is in the category "Vehicle Parts & Accessories\Car Parts\Emission Systems\Particulate Filters". The seller is "rsj-carcare" and is located in Bilston, WV14 6AF.